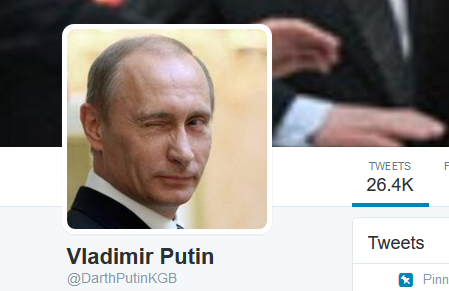 How did you find out about the account being suspended?

@DarthPutinKGB: I had a notification where someone tweeted it. I thought „so they (the Russian Ministry of Foreign Affairs) did get me shut down after all“. Shortly after I got the note [from Twitter].

What do you think triggered the suspension? Any particular tweet you can think of?

You read when their spokeswoman went off about Euronews‘ „russophobia“ and „info war against Russia“ because they mistook [a fake] Lavrov’s account tweeting about some insignificant Italian local council saying Crimea is Russia?

I don’t run that account, but I saw the reaction it got, and then saw it was shut down.

I think that they cannot take being laughed at. They know all this bullshit about „those are not Russian troops“ and „Euromaidan was a CIA coup“ is just that – bullshit. So given that they throw millions at the message and still get mistaken for a parody, it’s a tough situation. They know that they have to show results, hence why RT went nuts about getting caught lying about their ratings. So come budget time, other ministries will say „give us the cash, they can’t spend it properly, they look like their parodies.“

So they had to do something, and shutting all these accounts down shows the superiors they are doing something. And if they can spin it to „russophobia“, it’s an excuse. No one is going to say that’s bullshit, then everything falls apart.

So did I understand correctly that you didn’t have any advance warning from Twitter – they went straight ahead and suspended the account?

Yes. I lodged an appeal and said no one could interpret this as anything but a parody. They replied this morning saying it may be reinstated if I change the name. I guess they don’t want tweets with the name „Vladimir Putin“ being followed by „this is more accurate than what the Kremlin says“. Or „I can’t tell this from the so-called real account“. So I probably have to appear as ‚Depressed Putin‘ or something.

What do you think this suspension says about freedom of speech in Russia – and about big technology companies‘ willingness to accommodate Russian authorities?

I think freedom of speech in Russia would be a good idea.

Twitter is setting a dangerous precedent. All of the world’s repressive regimes are aware that spontaneous, organic protests have been organized through Twitter (and other platforms). They fear this greatly, hence their various attempts to control it. If a company like Twitter can be told „kill these accounts now“ and they do it, whose side are they on? The people protesting to demand accountable governance, or with those who will shoot them for doing so?

What was your motivation for putting so much effort into this account?

I don’t think I put that much effort into it. While I loathe dictatorships who use mass surveillance, fear and targeted violence to keep themselves in power while they loot the state and extort bribes from people least able to pay them, I find that most of the tweets either write themselves or just come to me.

My motivation initially was that I didn’t think anyone was parodying him very well. No one who listened to what he said or watched what he did (carpet bombing Chechnya and then shooting any journalist that investigated the place was a pretty clear sign most chose to ignore) could be surprised at the current unpleasantness. The only surprise is that so many were surprised. Except I am not surprised. Stop me if that’s too many layers…

Do you think your account would still be up if you had been less funny?

Probably. It’s hard to say. It’s important to note that I don’t actually try to be funny with many of my tweets. I’m just holding a mirror to the Kremlin hypocrisy and lies. A lot of people who claim to be doing PhDs aren’t smart enough to see that. Fortunately, most are.

Anyway, I think that’s the aspect that pisses them off. If I just tweeted pictures of him topless and nothing else, they probably wouldn’t care.

I think they were stupid to make it obvious that it was annoying them by going after so many accounts. We weren’t that important – now everyone knows they fear humor and can’t stand being the butt of a joke.